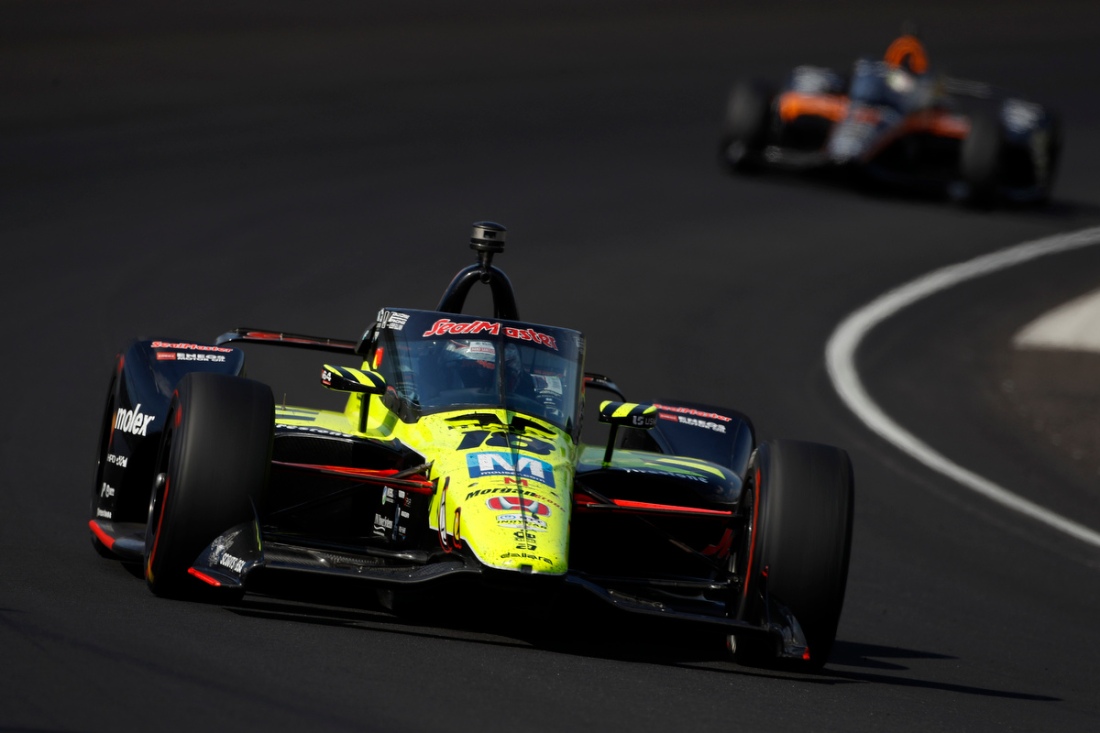 Has Most On-Track Passes and Improves the Second Most Positions

Santino Ferrucci Race Day Summary:
• Santino Ferrucci drove a phenomenal race in the No. 18 Team SealMaster-Dale Coyne Vasser-Sullivan entry passing the most cars on track, 29, and improving the second most positions, 15, to finish fourth in the 104th running of Indianapolis 500 on the fabled 2.5-mile Indianapolis Motor Speedway oval.
• Santino Ferrucci qualified 19th and started on the inside of Row 7 for the “Greatest Spectacle in Racing.”
• He moved into the top-10 on lap 47 where he remained the entire race other than during pit stops.
• Ferrucci battled his way into the top-five, which some incredible on track passes on lap 79 and waHs never lower than eighth the rest of the race.
• He took over fourth place on lap 185 and if not for a late yellow flag, which ended the race, had a legitimate shot at a top-three finish.
• Ferrucci led one lap today, his first in an Indy 500.

Santino Ferrucci Race Day Quote:
“Just an incredible race. The SealMaster Honda was insane today. We started 19th and finished fourth. The guys worked really hard on pit lane, on the timing stand and the strategy was perfect. I’m just really happy, after two incredibly long weeks of focusing on the SealMaster car we ended really good. During the first pit stop I got caught in neutral, and it was like a blessing in disguise. It set us way back, but the momentum we had just carried us. On the restart we went from 25th right back into the top-10 where we needed to be and we just fought our way into the top-four.”

Santino Ferrucci Fast Facts:
• The 2020 Indianapolis 500 was Ferrucci’s 28th career NTT IndyCar Series start and second Indianapolis 500.
• The fourth place finish is his best in two Indianapolis 500 races surpassing a seventh place showing in his Indy 500 debut last, which earned him the 2019 Rookie of the Year Award.
• Ferrucci earned 65 points today (double points for the Indy 500) and is now eighth in the IndyCar championship standings with 181 points.
• Todays’ fourth place finish is his best of the 2020 NTT IndyCar Series season. He has now finished in the top-9 in four of the seven. In addition to the fourth place showing in the 104th running of the Indianapolis 500 he placed sixth twice, both at Road America, and finished ninth in the GMR Grand Prix.
• Ferrucci is contesting his second full NTT IndyCar Series season and first with Dale Coyne w/ Vasser-Sullivan.
• In 28 career IndyCar starts, Ferrucci has four top-four finishes (Fourth: 2020 Indianapolis 500, Texas Motor Speedway, Pocono Raceway and World Wide Technology Raceway, all in 2019) and 11 top-10 showings.
• Ferrucci, 22, is a native of Woodbury, Connecticut and resides in Port St. Lucie, Florida.

Next Race:
Round 8 and 9 of the 2020 NTT IndyCar Series season will be the Bommarito Automotive Group doubleheader, August 29 and 30, at World Wide Technology Raceway in the Madison, Illinois. Metro area.