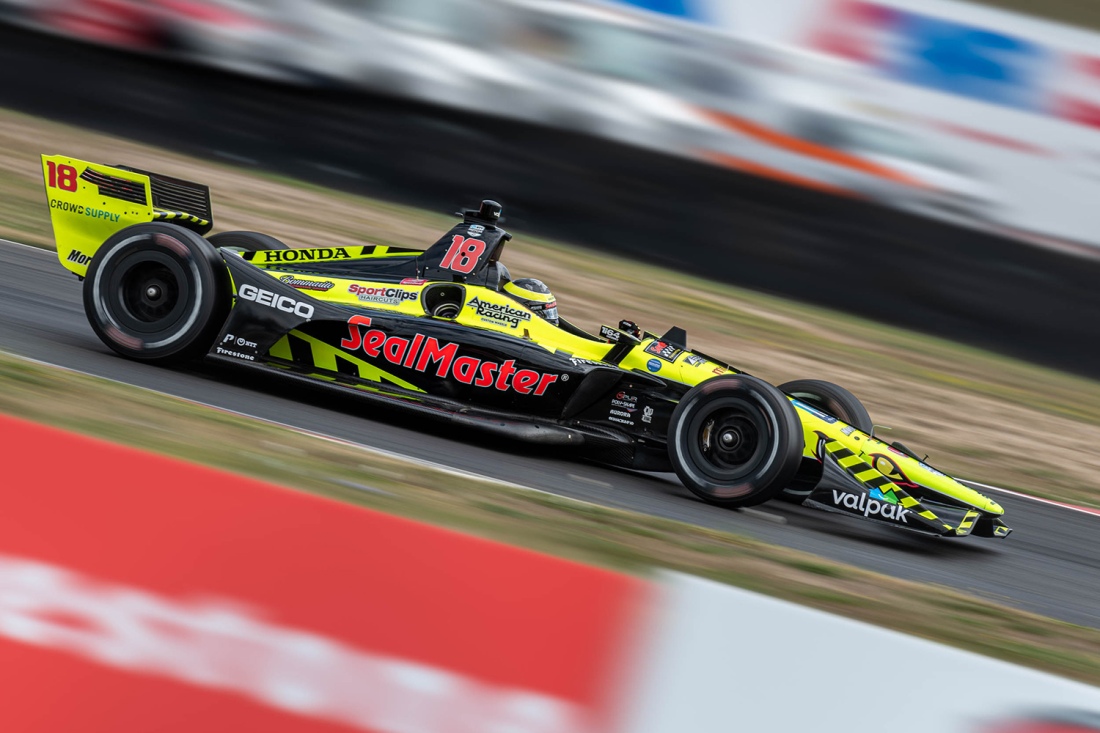 Sebastien Bourdais Race Summary:
Sebastien Bourdais piloted the No. 18 Team SealMaster – Dale Coyne Racing w/ Vasser-Sullivan machine to a ninth place finish today in the Grand Prix of Portland on the 1.967-mile, 12-turn Portland International Raceway permanent road course in Portland, Oregon. Bourdais started 12th after a non-engine related fuel issue thwarted what should have been a top-six qualifying position. On the opening lap of the race a multi-car crash in turn one forced several cars, including Bourdais, to use the emergency escape route. However, when officials reordered the field prior to the restart they dropped Bourdais to 13th place. He fought his way back, passing several cars and was solidly in the top-six leading three laps at one point. However, during his second pit stop, the team had an issue with the fuel hose and when Bourdais rejoined the race he was back to 13th. Once again, he battled and got back into the top-10 where he ran literally the entire second half of the race getting as high as eighth and recording the fastest lap of the race. Unfortunately, during the final restart on lap 101 of the 105 lap contest, he lost one position dropping to ninth. Bourdais earned 23 points for his effort and is now 11th in the championship standings with 335 points and just the season ending Firestone Grand Prix of Monterey remaining on the 2019 NTT IndyCar Series calendar.

Sebastien Bourdais Race Quote:
“The SealMaster Honda No. 18 was really competitive and we had the fastest lap of the race. I was really happy with it. Unfortunately, we got hosed with the repositioning after the crash on the first lap. I had no chance to make the chicane. I had to bail out and take the escape route. During the reorder I was moved back four positions from where I should have been. We fought hard, passed a bunch of guys and put ourselves back in contention to finish sixth. Then we had some drama with the fueling. A valve didn’t operate like it was supposed to and it took what felt like an eternity to fill the car, so we lost all the positions we had made on track. I made a couple of them back and got to eighth, but at the end Leist pitted for new tires and I had pushed so hard to get to Simon (Pagenaud) I had nothing left on my tires and I lost a position during the final restart.”

Fast Facts:
After the first 16 races of the 17-race NTT IndyCar Series season, Bourdais is 11th in the championship standings with 335 points. He has scored eight top-10 finishes including a season high third place finish at Barber and a fifth at COTA. He finished seventh at Pocono, eighth at Toronto and Texas, and ninth at Detroit GP Race 2, Iowa and Portland. Bourdais also has four 11th place showings, Mid-Ohio, Detroit Race 1, Long Beach and the INDYCAR GP, placed 12th at Road America, 19th at St. Louis, 24th at St. Petersburg and 30th in the Indy 500.

Next Race:
Round 17 of the 2019 NTT IndyCar Series season will be the Firestone Grand Prix of Monterey, September 20-22, on the 2.258-mile, 11-turn WeatherTech Raceway Laguna Seca permanent road course in Monterey, California.