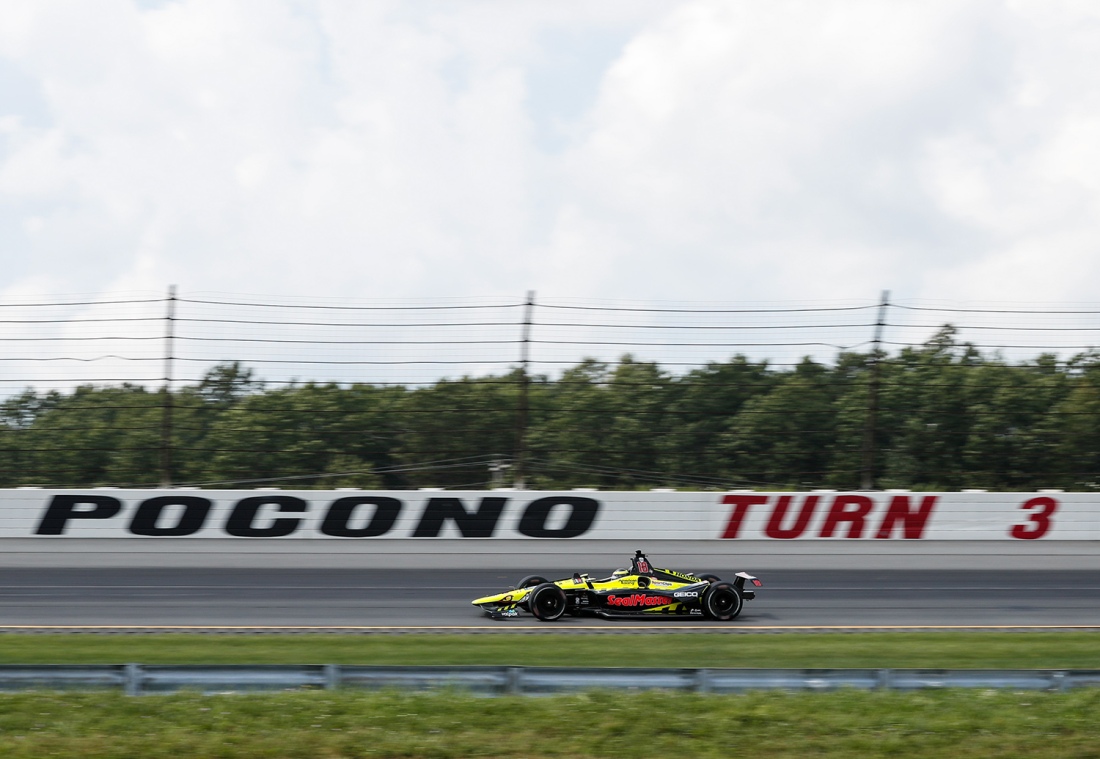 Sebastien Bourdais Race Summary:
Sebastien Bourdais drove the No. 18 Team SealMaster – Dale Coyne Racing w/ Vasser-Sullivan car to a seventh place finish in today’s rain shortened ABC Supply Inc. 500 on the 2.5-mile Pocono Raceway tri-oval in Long Pond, Pennsylvania. Bourdais started 11th after qualifying was cancelled yesterday, due to inclement weather, and drivers were gridded based on championship points. A horrific first lap crash took out five cars and Bourdais quickly found himself in sixth place. He remained there through his first pit stop and most of the second stint before taking over fifth place just prior to his second stop. By the end of the second round of stops, Bourdais was in fourth place. However, following the third and final yellow flag of the race he lost four positions on the restart. Bourdais ran in eighth place for the remainder of the third stint and shortly after his third, and what would prove to be his final pit stop, picked up one position to move into seventh. At that point he was running as fast, if not faster, than many of the cars ahead of him and gaining track position when the race was halted on lap 128 of the 200 lap contest for lightning within seven miles of the track. Officials quickly threw a red flag halting the contest and shortly thereafter checkered flagged the race when a massive rain storm arrived. Bourdais earned his seventh top-10 finish of the season scoring 26 points, which moved him back into the top-10 in the championship race at No. 10 with 300 points.

Sebastien Bourdais Race Quote:
“It was a strong run for the SealMaster Honda No. 18. We were quick and I got up to fourth at one point. I think we deserved that position. It was kind of a broken up race and unfortunately, on the last restart, the guys in front of me checked up and I got swallowed up and lost four positions. I got one position back, then the race was stopped because of the weather. I think if the race continued we would have finished better than seventh, but that’s racing.”

Fast Facts:
After the first 14 races of the 17 race 2019 NTT IndyCar Series season, Bourdais is 11th in the championship standings with 274 points on the strength of seven top-10 finishes including a season high third place finish at Barber and a fifth at COTA. In addition to today’s seventh place finish he placed eighth at Toronto and Texas, and ninth at Detroit GP Race 2 and Iowa. Bourdais also has four 11th place showings, Mid-Ohio, Detroit Race 1, Long Beach and the INDYCAR GP, placed 12th at Road America, 24th at St. Petersburg and 30th in the Indy 500.

In six races at Pocono, Bourdais has finished in the top-10 three times with two top-five showings, a Pocono best fourth in 2018 (fifth in 2016).

Next Race:
Round 15 of the 2019 NTT IndyCar Series season will be the Bommarito Automotive Group 500, August 23-24, on the 1.25-mile, Gateway Motorsports Park oval in Madison, Illinois (St. Louis Metro Area).