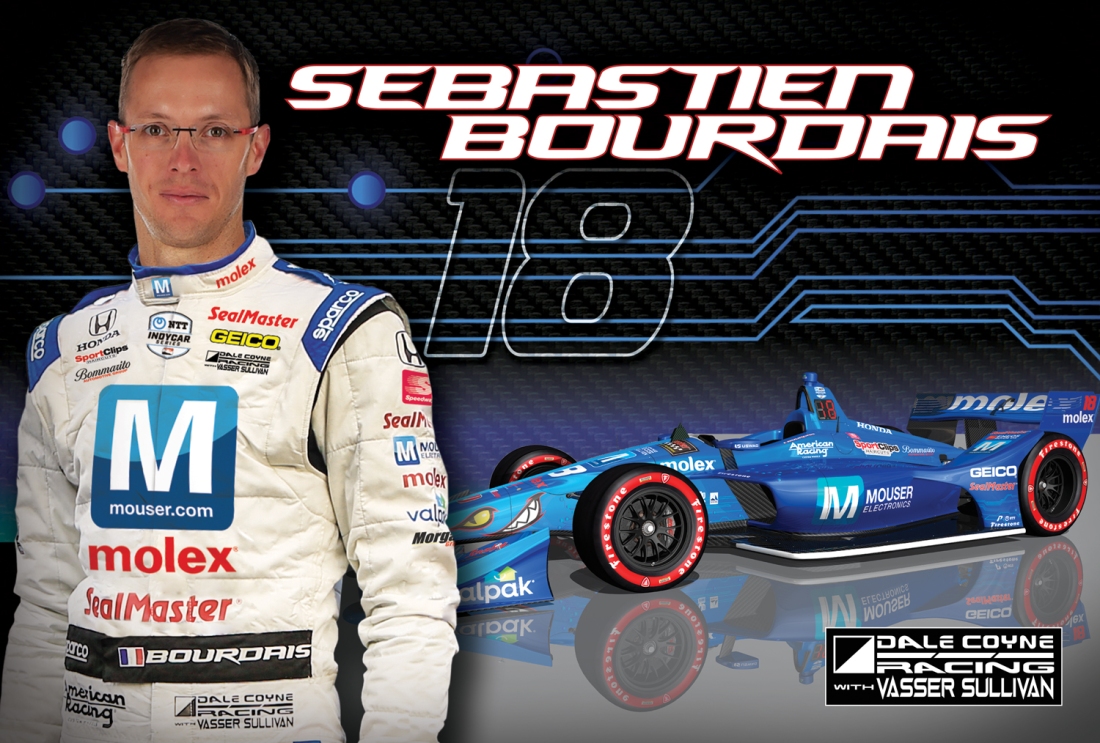 MANSFIELD, Texas – July 9, 2019 – Dale Coyne Racing with Vasser-Sullivan announced today that for the second consecutive year Mouser Electronics, Inc. and Molex, LLC will be the primary sponsors of the No. 18 entry driven by Sebastien Bourdais for the Honda Indy Toronto, July 12-14 in Toronto, Canada.

“Mouser Electronics and Molex Connectors are so much more than sponsors for us. For eight years now we have collaborated together as partners to make both our teams better. We head into the Honda Indy Toronto proud to be unveiling the newest version of the Mouser-Molex machine,” said Vasser-Sullivan Co-Owner James “Sulli” Sullivan.

Mouser first sponsored IndyCar racing in 2011 as an inventive way to communicate its performance driven business model and promote the newest technologies. The Mouser- and Molex-sponsored car won the Indianapolis 500 in 2013 as well as the 2017 and 2018 series-opening races at St. Petersburg, Fla.

Now all eyes will be on the Toronto race and the sharp-looking No. 18 car as championship driver Bourdais navigates the tight 11-turn, 1.786-mile course through scenic downtown Toronto — about an hour’s drive from Mouser’s Canadian Customer Service Center at Kitchener-Waterloo in the Ontario technology corridor.

“We wish Sebastien and the team the best of luck as they take to the streets of Toronto in the ‘Mouser Machine’ for the second year in a row,” said Todd McAtee, Mouser Electronics’ Vice President, Americas Business Development. “The collaboration between this team, Mouser Electronics, and Molex is a testament to our collective commitment to excellence.”

Mouser Electronics, the industry’s leading new product introduction (NPI) distributor with the widest selection of semiconductors and electronic components. They have, once again teamed up with valued supplier Molex to sponsor Bourdais and the Dale Coyne Racing with Vasser-Sullivan team for the entire 2019 NTT IndyCar Series.

“We are excited to cheer on Bourdais and the team as the No. 18 car flies Mouser and Molex colors this weekend,” said Fred Bell, Vice President of Global Distribution, Molex. “All of us at Molex are honored to once again team up with Mouser to sponsor the No. 18 car this season. This sponsorship further demonstrates our commitment to our long-term relationship with Mouser, to our joint customers and to new innovations in the automotive industry.”

The Honda Indy Toronto will be Bourdais’ 199th career IndyCar start and 15th on the streets of Toronto. In 198 IndyCar starts, Bourdais has won 37 races (sixth all-time) and captured 34 pole positions (seventh all-time). In 14 previous races at Toronto, Bourdais has a remarkable record. He has qualified in the top 10 a total of 13 times with nine top-five starting positions and four poles (2004, 2005, 2007 and 2014 Race 1). He has finished in the top-10 a total of 12 times with eight top-five showings, five podium performances and two wins (2004 and 2014 Race 1, both from the pole). Bourdais is the only driver to win four consecutive IndyCar championships (2004 – 2007). Bourdais, 40, is a native of Le Mans, France, but resides in St. Petersburg, Florida.

“I have spent time with the Mouser and Molex team members in Texas and at the track during the last several years and I continue to be impressed with their people and operation,” said Bourdais. “Mouser, Molex and this Dale Coyne Vasser Sullivan team pursue the same thing…speed and excellence, that’s what makes this partnership work,” Bourdais noted.

Mouser Electronics, a Berkshire Hathaway company, is an award-winning, authorized semiconductor and electronic component distributor focused on rapid New Product Introductions from its manufacturing partners for electronic design engineers and buyers. The global distributor’s website, Mouser.com, is available in multiple languages and currencies and features more than 5 million products from over 750 manufacturers. Mouser offers 25 support locations around the world to provide best-in-class customer service and ships globally to over 600,000 customers in more than 220 countries/territories from its 750,000 sq. ft. state-of-the-art facility south of Dallas, Texas. For more information, visit http://www.mouser.com. For more information on Mouser-sponsored Indy racing, visit www.mouser.com/indy-racing.

Trademarks
Mouser and Mouser Electronics are registered trademarks of Mouser Electronics, Inc. All other products, logos, and company names mentioned herein may be trademarks of their respective owners.
About Molex, LLC:
Molex brings together innovation and technology to deliver electronic solutions to customers worldwide. With a presence in more than 40 countries, Molex offers a full suite of solutions and services for many markets, including data communications, consumer electronics, industrial, automotive, commercial vehicle and medical.

About Dale Coyne Racing with Vasser-Sullivan: