Indianapolis, IN (May 24, 2019) – Dale Coyne Racing is pleased to announce that ENEOS, Japan’s leading oil company, has joined its family of partners by becoming the team’s Official Lubricant Supplier.

ENEOS is the brand name for products manufactured by JXTG Nippon Oil & Energy Corp. – the largest oil company in Japan and sixth largest in the world. ENEOS products are among the highest quality lubricants available in the marketplace today.

The products use advanced base oil and additive technology as the result of joint engineering, research and supply to all the major Japanese automotive manufacturers. ENEOS lubricants provide exceptional protection, performance and power for a wide variety of applications, from automobiles to diesel trucks, motorcycles and race cars.

While the company spans the globe, its US-sold products are produced in the United States at a plant near Birmingham, AL. 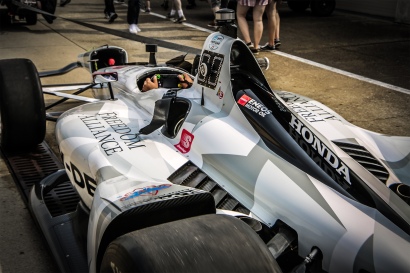 “We’ve been involved in many different racing series around the world, from Formula DRIFT and NASCAR to MotoGP and Formula One. Our next logical step was to partner with a team in the NTT IndyCar Series, and we’re delighted to have formed this partnership with Dale Coyne Racing as we look to broaden our brand exposure into different markets,” said Shinichi Handa, CMO of JX Nippon Oil & Energy USA.

“I’m proud to welcome ENEOS to our team as our Official Lubricant Supplier,” added Team Owner Dale Coyne. “Without question, ENEOS is among the best lubricant brands in the world. We look forward to working with them and benefiting from their understanding of high-technology lubricants.”

The ENEOS logo will make its first appearance on the Dale Coyne Racing entries at this weekend’s 103rd running of the Indianapolis 500, in which the team’s cars are starting seventh (Sebastien Bourdais #18), 15th (James Davison #33) and 23rd (Santino Ferrucci #19). The race will be broadcast live on NBC from 11am ET, with a pre-race show on NBCSN starting at 9am ET on Sunday May 26, 2019.
ABOUT JXTG NIPPON OIL & ENERGY CORPORATION
JXTG Nippon Oil & Energy Corporation is a fully integrated petroleum products company headquartered in Tokyo, Japan. JXTG offers petroleum products and services throughout the world. Through partnerships with world-class customers, JXTG produces technologically advanced motor oils and transmission fluids that reduce carbon emissions, improve fuel economy and reduce wear on critical components. For more information please visit noe.jxtg-group.co.jp

ABOUT DALE COYNE RACING
Dale Coyne Racing (DCR) is an NTT IndyCar Series team based in Plainfield, IL, about 40 miles southwest of downtown Chicago. The team has participated in every season of the INDYCAR/Champ Car World Series since 1984. DCR earned its first IndyCar win in 2009 with the late, great Justin Wilson at Watkins Glen and picked up its most recent one after becoming back to back winners on the Streets of St. Petersburg with driver Sebastien Bourdais in 2018. Team owner Dale Coyne is a true racer with a long history in racing. As an Indy car driver for five years, and a team owner for more than 30 years, he is among the most experienced team owners in the Series paddock and highly respected by his peers. Coyne is a Midwestern entrepreneur who designed and built Route 66 Raceway in Joliet, IL. He and Tony George, along with International Speedway Corporation (ISC), expanded the facility by forming a partnership and building Chicagoland Speedway. Coyne served as president of the facility through its construction and opening season and served on its management committee until its eventual buyout by ISC in 2007. The DCR Team Owner has several other investments, including being the largest Sonny’s BBQ franchisee in the country.