Santino Ferrucci of Dale Coyne Racing is the latest of a new wave of young American drivers to achieve their life-long dream of racing in the IndyCar Series when he competed in four rounds of the Verizon IndyCar Series this season.

The engaging 20 year old from Woodbury, CT took his message of determination to the student body of Santa Rosa’s (CA) North Valley school, Wednesday of Sonoma race week in the Racing For Kids’ annual visit to the school for special needs kids.

“I started racing Go-Karts when I was five years old,“ he told the group of 60. “I knew then that I wanted to be a racer. I loved the adrenalin of racing and going fast.

“I played baseball and it was fun, but I spent my spare time racing karts until I was 15. Then I got into formula cars and raced in the US, Europe and Japan. Eventually, I got the chance to race in IndyCar this year and it’s been great.”

The North Valley School kids warmed to Ferrucci who admitted: ‘I’m not that much older than you; not that long out of high school.” 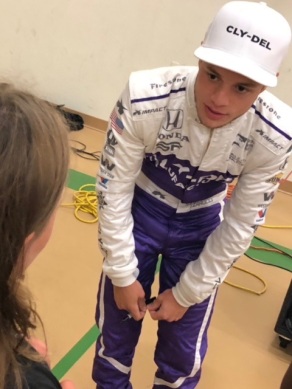 The questions he received were plentiful and often well thought out from the group of special kids.

Ferrucci was asked about the safety aspects of IndyCar racing, the rush he felt at high speeds, if he got dizzy racing, if he’d been in accidents, how much money drivers make and how long he wished to race.

Several young girls were eager to know: “Do you have a girlfriend?” “Are you married?” Ferrucci laughed loudly as he answered: “Yes” and “No.”

North Valley Principal, Jennifer Lux, eventually ended the Q & A Session, so the students had time for individual pictures with Ferrucci in his purple and white drivers suit (“I get a lot of Barney jokes” he admitted). The students also received autographed hero cards and the popular red Racing For Kids baseball caps.

As he left the North Valley School gymnasium, Ferrucci was asked several times when the Sonoma Race would be on television ( 3:30 PDT on NBCSports). The TV interest was an indication that the 90 minutes the young racer spent at the Santa Rosa School had recruited a new group of young fans.