Sebastien Bourdais Qualifying Summary:
Sebastien Bourdais had an incident in Turn 2 on the “out” lap of the Round 1, Group 2 qualifying session and will start 24th in tomorrow’s Honda Indy 200 on the Mid-Ohio Sports Car Course in Lexington, OH. Bourdais, behind the wheel of the No. 18 Team SealMaster – Dale Coyne Racing with Vasser-Sullivan car, was seventh in this morning’s final practice. After leaving pit lane to begin his qualifying session, Bourdais entered Turn 2, slid across the track, and into the wall ending his session.

Sebastien Bourdais Qualifying Quote:
“The same thing as a couple of other times where I look like an idiot on the out lap or the first lap, going straight with no rear brakes whatsoever. We, for whatever reason, have to run a very forward brake balance and the front brakes heat up much faster than the rears. It was a super slow out lap. It’s been like that the whole weekend, everyone is not getting going and I just can’t seem to be able to factor it in. You need to be so far off any kind of braking references until the brakes temperature stabilizes. I just can’t wrap my head around it and I keep getting caught out and making mistakes. It’s very frustrating. I am very sad for the guys, they have worked so hard, and for SealMaster, Honda, everyone involved. We have a pretty good race car and we have nothing to show. 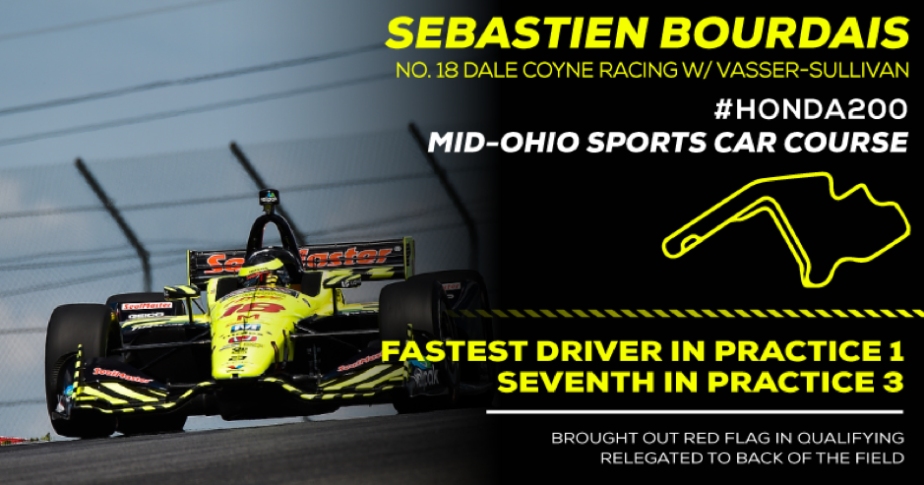 Broadcast Times:
Round 13 of the 2018 Verizon IndyCar Series, will be the Honda Indy 200 at Mid-Ohio, July 29, on the Mid-Ohio Sports Car Course permanent road circuit in Lexington, Ohio. The race will be broadcast live on NBCSN at 3:00 p.m. ET.  It is also available on radio: XM 209 and IMS IndyCar Radio as well as online: IndyCar.com and Verizon IndyCar 15 app.