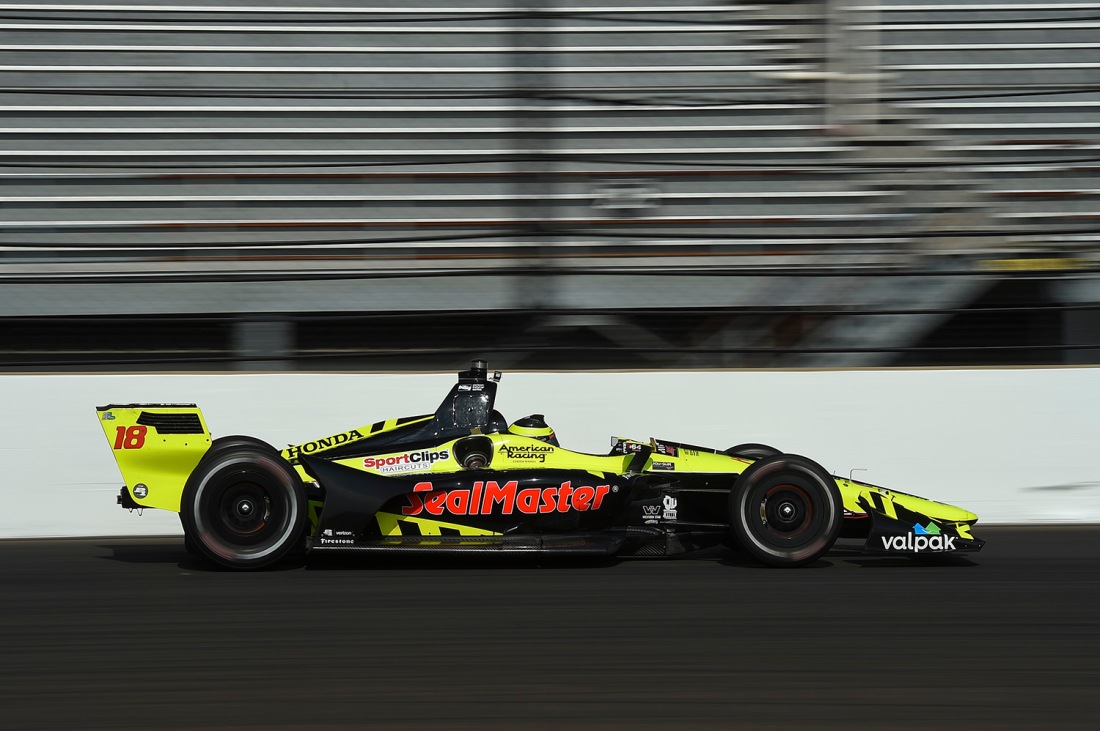 Sebastien Bourdais Race Summary:
Sebastien Bourdais piloted the No. 18 Team SealMaster – Dale Coyne Racing with Vasser-Sullivan Honda/Dallara/Firestone machine to a fourth place finish today in the INDYCAR Grand Prix. Bourdais, who had his best qualifying effort on the 2.439-mile, 14-turn Indianapolis Motor Speedway road course, started third. On the opening lap he passed Robert Wickens to move into second when the first of only two yellow flags came out. On the restart, Wickens was able to repass dropping Bourdais back to third.  He essentially held station through the remainder of the stint and the first and all of the second stint. When the second yellow came out the entire field pitted and Scott Dixon managed to get out just ahead of Bourdais dropping him to fourth. Since the final stop took place several laps early most of the field was in fuel saving mode, but Alexander Rossi was aggressive and passed Bourdais dropping him to fifth. As the final stint came to a conclusion, Rossi’s aggressiveness became his downfall as he could not use his push-to-pass, so on the last lap Bourdais spectacularly got by to reclaim fourth using his push-to-pass. The St. Petersburg, FL resident has now placed in the top-five three times in the INDYCAR Grand Prix, all fourth place finishes (also fourth in 2014 and 2015). Bourdais, the only driver to win four consecutive IndyCar championships (2004 – 2007), earned 36 points and remains third in the championship standings with 152 points and closed the gap to both points leader Josef Newgarden and Rossi. Bourdais has now finished in the top-five in three of the five races held this season. In addition to today’s fourth place finish, he has a win at St. Petersburg, a fifth place performance at Barber and a pair of 13th showings at Phoenix and Long Beach.

Sebastien Bourdais Race Quote:
“Really good points there for the SealMaster Honda No. 18. I just didn’t feel like I did the best job to maximize the result. At the end, we got another fourth place and honestly I didn’t know what we were gonna get. We were loose for most of the race, which made for a very tough run. I thought the track was going to finally come to us and it didn’t. The balance was only good when we put the brand new red (alternate) Firestone tires on. The guys (other drivers) were really aggressive at the start of that last run and I didn’t know whether I should say screw the fuel number and go with them.  I was already not making the number and under a lot of pressure from behind, so I thought maybe we just don’t have the pace and had to give up some positions. After that I was kind of a lonely wolf out there doing my thing and trying to make the fuel number a bit better. Next thing you know the leaders are backing up big time to us. Wickens didn’t want to give up on Rossi and Rossi was being aggressive, so by the end of that stint we had saved enough fuel to use the push-to-pass and he couldn’t and we recovered fourth. Overall, not super happy with myself. I feel like I missed on the balance a little bit. I feel like I didn’t get it quite done. Ultimately all that matters is we got the points from the fourth place and we’re looking pretty strong in the championship. Hopefully it keeps on happening.”