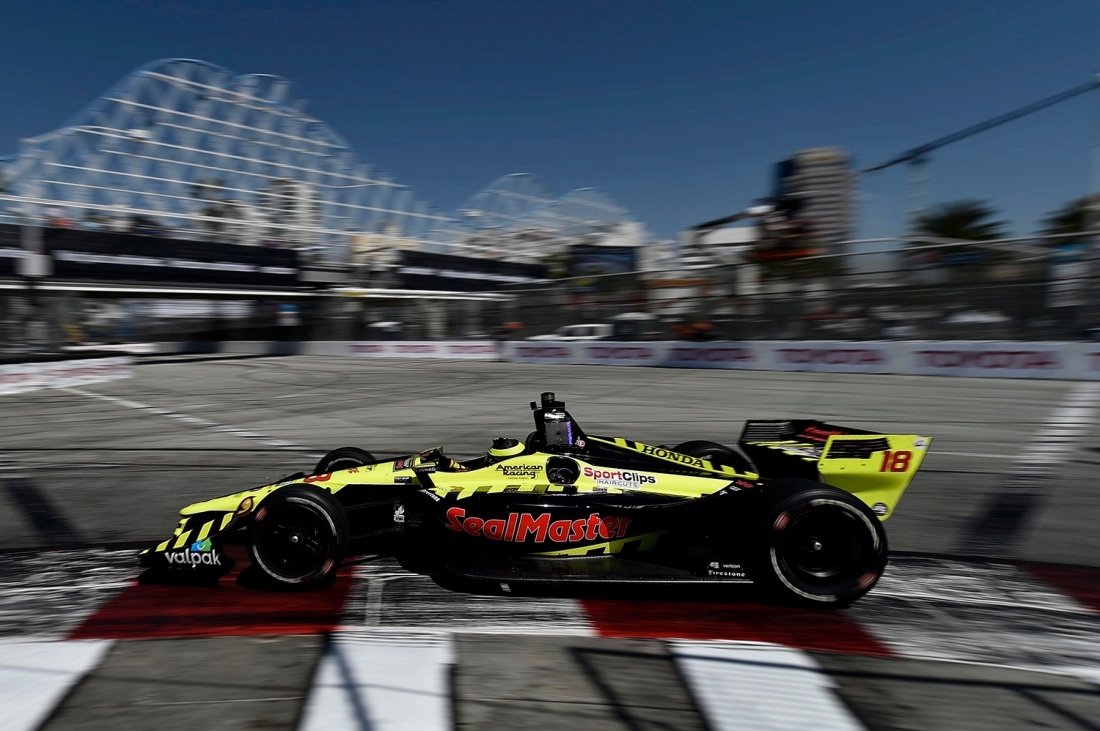 Sebastien Bourdais Qualifying Summary:
Sebastien Bourdais began and ended the day ninth. Bourdais was ninth on the combined speed report following two practice sessions yesterday, but dropped to 11th after this morning’s practice prior to qualifying. He took the No. 18 Team SealMaster – Dale Coyne Racing with Vasser-Sullivan Honda/Dallara/Firestone car out in Group 2 in the first round of qualifying and logged the third fastest lap and therefore advanced to Round 2. In the second round, the team decided to wait until approximately five minutes left in the 10-minute session and make one run on the alternate red tires. Bourdais launched and after getting his tires up to temperature was working a lap that would have put him solidly in the top-six and advanced him to the final round, the Firestone Fast Six. Unfortunately, entering Turn 1 the car wiggled and he lost a couple of tenths of a second. Bourdais ended up ninth of the 12 drivers in Round 2 and will start ninth in tomorrow’s Toyota Grand Prix of Long Beach.

Qualifying:
Round 1 (Group 2): Third – 67.5662 sec
Round 2: Ninth – 67.1943 sec/105.438 mph
Round 3 (Firestone Fast Six): N/A
Qualified: Ninth – 67.1943 sec/105.438 mph
Sebastien Bourdais Qualifying Quote:
“I’m disappointed with Q2 (round 2 of qualifying) after the way Q1 went. We put ourselves in a hole in Q1. We got ourselves at the tail end of the queue and the car in front of us locked up going into Turn 1, so I had to abort that lap. It was not an easy run, but I still pulled it off on lap three and I really thought we were going to be pretty good from there. Unfortunately, I didn’t get the lap I wanted to achieve in Q2. I got a big wiggle in Turn 1. I’m not sure what happened, but that was the difference. We lost two, two and a half tenths on that lap and that was that. We missed Q3 by a tenth. It’s a bummer, but it is what it is. We will keep digging and hope for a better outcome tomorrow.”

Race Broadcast:
The Toyota Grand Prix of Long Beach, Round 3 of the 2018 Verizon IndyCar Series, will be held on Sunday, April 15, on the streets of Long Beach, CA. The race will be broadcast live on NBCSN at 4:00 p.m. ET.  It is also available on radio: XM 209 and IMS IndyCar Radio as well as online: IndyCar.com and Verizon IndyCar app.