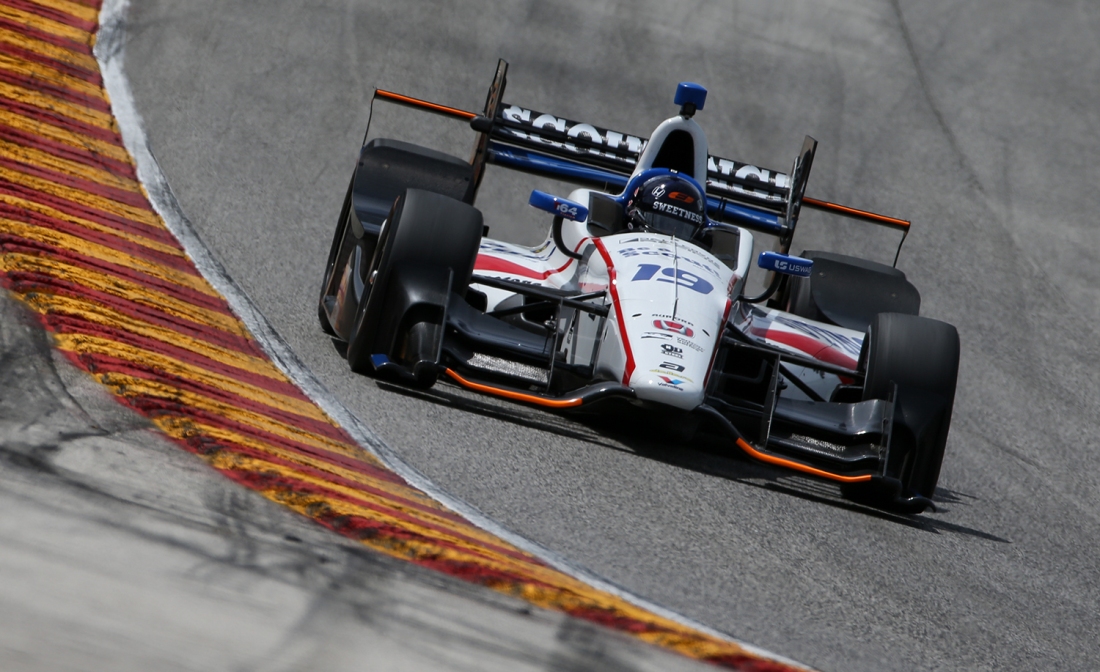 Elkhart Lake, WI (June 25, 2017) – Dale Coyne Racing drivers Ed Jones and Esteban Gutierrez both had a tough race at the KOHLER Grand Prix at Road America but each had a different outcome to their day with Jones picking up a fifth Top 10 finish this season with a seventh place and Gutierrez placing 17th.

The race started out well for the pair of rookies with Jones gaining a couple of positions from his 11th place starting position and Gutierrez moving up as high as 11th, from his 18th spot on the grid, before pitting on Lap 13.

During the next 14 laps, Jones and Gutierrez followed each other on track with Jones sitting 10th and Gutierrez in 11th when they both headed to pit lane on Lap 27.

Following their second stop, Jones in the 19 Boy Scouts of America car was able to keep moving forward while the driver of the #18 Unifin car struggled with understeer and had to pit a handful of laps later to replace a damaged front wing.

The time lost in pit lane sent Gutierrez to the back of the lead lap, in 18th position. He would later on gain one more position to take the checkered flag in 17th.

Meanwhile, Jones was making his way back into the Top 10. Despite falling to 12th following his last pit stop, he would take the Lap 49 restart in 10th place and had moved up to seventh by lap 53, where he would remain until crossing the finish line.

With today’s result, Jones moves into 10th place in the Championship standings with 254 points.

The Dale Coyne team now heads straight to Iowa Speedway for a test day on Tuesday, June 27 with both cars. Gutierrez will be getting his first taste of an oval track. He’ll be taking part in his rookie orientation ahead of the Iowa Corn 300 which takes place July 9, 2017.

Esteban Gutierrez – #18 Unifin Honda
“It was a crazy race. I had a good start and we tried to go on with the race, trying to find the right balance in the car. Obviously, I was giving my best all the time. Then I started to have a lot of understeer in the car and I struggled to find the pace, and a good balance. I was not feeling comfortable in the car at one point. I had to pit a few times to change the front wing to try and see if there was any damage or anything. It was hard to understand what was going on. It was a very tough race but I think we have to move forward and use this as an experience and keep working hard. I definitely learned quite a lot out there.”

Ed Jones – #19 Boy Scouts of America Honda
“It was a really tough race. We had a loose car yesterday, it was loose but fast for qualifying, and today again the car was really loose. I was hanging on the whole race but the team had some good pit stops and we were able to move up. Obviously, the strategy was pretty similar to everyone else. Everyone was aggressive out there, it was hard racing but we came out with a seventh place, and we moved up a little bit in the points.”