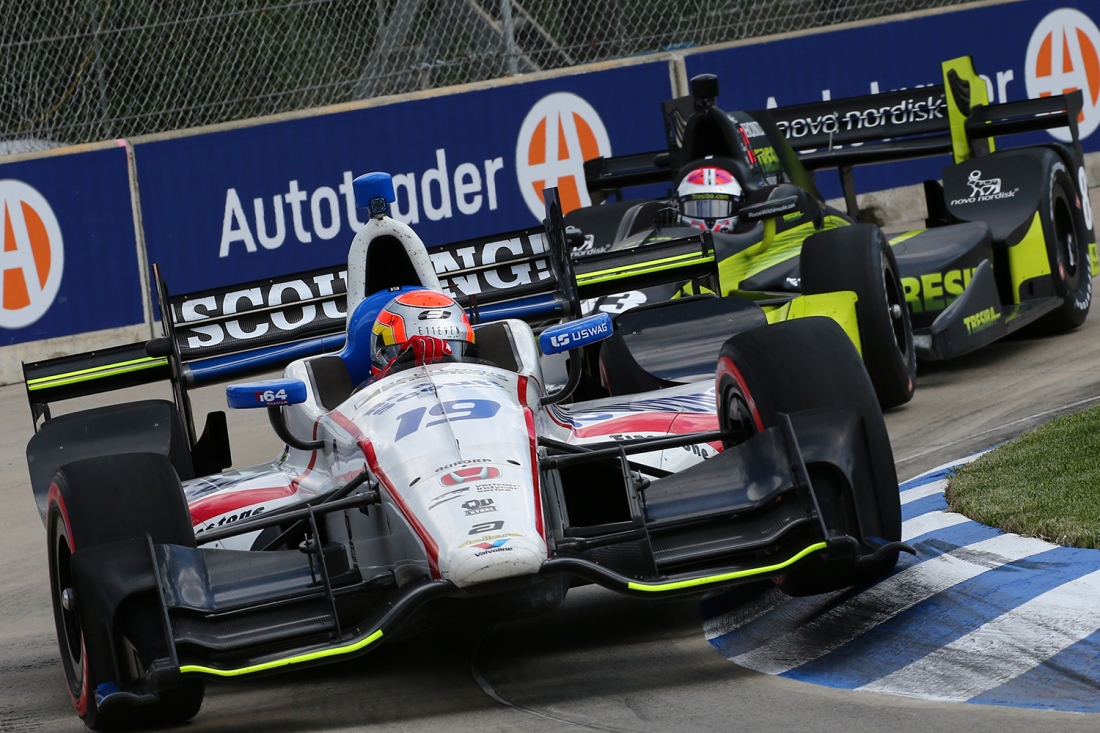 Detroit, MI (June 3, 2017) – Ed Jones and Esteban Gutierrez put in strong performances for Dale Coyne Racing during Race 1 of the doubleheader weekend at the Detroit Grand Prix with Jones moving up 12 places to finish ninth and Gutierrez taking the checkered in 19th.

It was the first appearance for both drivers around the 2.35-mile, 13-turn street course on Belle-Isle, as well as Gutierrez’ first race aboard an Indy car.

With only two 45-minute practice sessions on Friday, the rookie drivers had 12 minutes to qualify on Saturday morning for that afternoon’s race.

With Gutierrez and Jones starting 19th and 21st, respectively, the team opted for a two-stop strategy to try and get their cars to the front, unlike most of the teams who decided to do three stops. The strategy paid off for Jones who was able to gradually move up the field.

Following his final stop, Jones had fallen back to 18th but with other cars having to make a third and final stop, the Brit was able to make his way up to ninth by the time the checkered flag fell, taking his fourth top-ten finish this season. Today’s finish also moved the rookie into seventh place in the Championship standings.

His teammate Gutierrez was taking his maiden Indy car race as a learning experience to get up to speed behind the wheel of his #18 Unifin car and to get his first complete IndyCar race under his belt. The Mexican achieved his goal, making it as high as 14th before placing 19th, all while fighting with experienced drivers such as Oriol Servia and the reigning Indianapolis 500 winner Takuma Sato.

Ed Jones and Esteban Gutierrez will be back in action tomorrow with their Dale Coyne Racing team for the second race of the Duel in Detroit. The 70-lap event will go green at 3:50pm ET and will be broadcast live on ABC from 3:30pm on Sunday, June 4, 2017.

Esteban Gutierrez – #18 Unifin Honda
“I’m very pleased and very grateful with the support I got from the team. It’s been very important for me to get into a rhythm. Obviously, it was a very big challenge to throw ourselves into a weekend at Detroit. A very difficult track and not knowing the car. This race was basically to get the rhythm, to find the speed and to complete the 70 laps and that goal today was achieved. We’re going to look for more for tomorrow’s race but we’re taking it step by step. It was a good day and a positive one because I could find more speed, more pace, I was more comfortable and more consistent. I feel very grateful with how everything went today.”

Ed Jones – #19 Boy Scouts of America Honda
“It was a good race, I started off not driving well enough earlier this weekend but I made big steps every session and I feel like finally we were quite comfortable with the track, so I was able to attack more. The car was really good and it allowed me to overtake some people and keep consistent lap times throughout the stints and we ran a good strategy. All in all everything worked together well and it gives me confidence for tomorrow.”