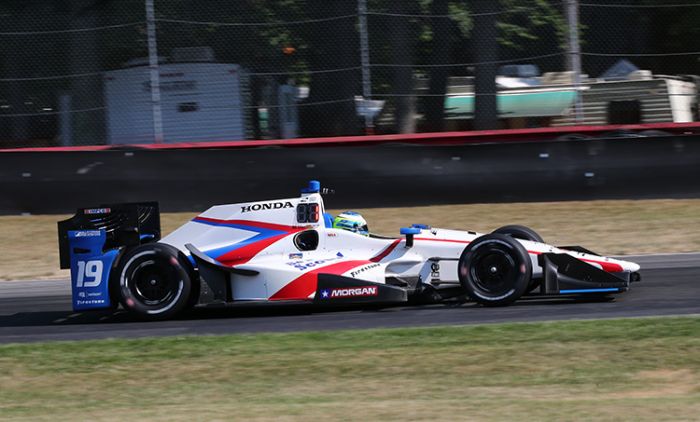 Enerson, who along with teammate Conor Daly went out in Group 2 of qualifying, spent most of the 10-minute session in the Top Six with a fastest lap of 1:04.6576. Things were looking good for the rookie from Florida, but with about one minute left in the session, he got knocked out from the group that was moving on to the next round.

Enerson’s performance in qualifying isn’t a one-time thing with the rookie placing as high as seventh in the practice sessions, ahead of experienced drivers such as his teammate Daly as well Helio Castroneves and Ryan Hunter-Reay.

Daly, in the #18 Jonathan Byrd’s Hospitality car suffered with a lack of grip during his qualifying session and wound up 11th in his group and 22nd on the starting grid for tomorrow’s race.

The Dale Coyne Racing drivers will have a 30-minute warm up session to make final changes to the Indy car starting at 10:15am tomorrow morning.

What they have to say:

Conor Daly – #18 Jonathan Byrd’s Hospitality
“For some reason, we had no grip on the Red tires, I don’t know where it went. Our car has been good all weekend, we just failed in qualifying. It’s a shame because realistically, I think our car has been good. We made it hard for ourselves again but nothing is impossible, so we’ll see.”

RC Enerson – #19 Boy Scouts of America
“(First time driving on Firestone Alternate tires) Those Red tires are crazy, they have a lot of grip compared to what I’m used to, I was just learning how to push it. I have to say I’m doing a little bit better than I thought I’d be doing so I’m surprising myself every single time, it’s a good feeling, and the team’s great to work with. We just need to keep pushing. I feel like we could’ve done a little bit better had we had four clear laps at the end, we kind of got caught up on the first three, so I just had to put it altogether on the last lap but I’m still happy with it.
“We have another practice in the morning so we’ll dial in the car a little bit, maybe try and run behind some people and see what the car is going to do but it will be important to hit my marks on pit stops and keep putting in some fast laps.”