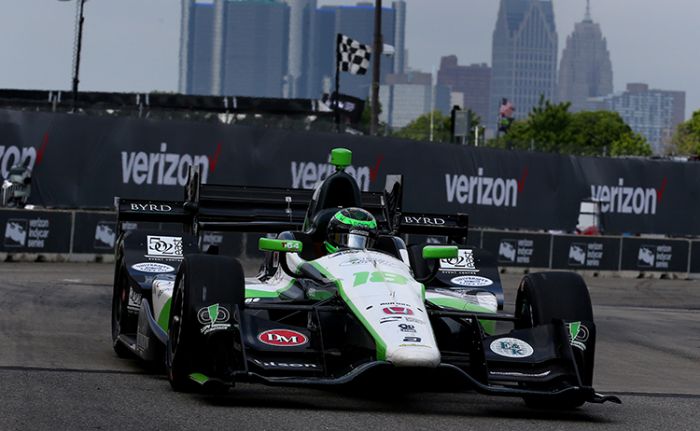 Detroit, MI (June 5, 2016) – Dale Coyne Racing had another good showing at the Dual in Detroit on Sunday with Conor Daly following up his podium performance from Saturday with a sixth place finish in Race 2 and with Gabby Chaves placing 13th after suffering contact early on in the race.

Daly and Chaves were starting 21st and 15th respectively following the morning’s 12-minute qualifying session. However, had it not been for a penalty invalidating his fastest lap for causing a local yellow in the early stages of qualifying, Daly would have started fifth.

Knowing he had the speed to run up front, Daly was on a mission to make his way through the field aboard his Jonathan Byrd’s Hospitality car, and that’s exactly what happened, gaining spots both on track and via his team’s strategy with pit stops.

The American gained position after position as the race went on and found himself in sixth once everyone had completed their final stop with less than 10 laps remaining. After picking up his career best finish on Saturday with a second place, Daly was once again the highest finishing rookie as well the driver that gained the most spots from start to finish.

While Daly managed to avoid a first lap, first turn incident involving several cars, his teammate Chaves wasn’t so lucky. Chaves suffered damage to the rear of the #19 Boy Scouts of America car after being hit by a competitor in Turn 1 and it set him back for the remainder of the race.

Having to make his way to pit lane for a new rear wing, he lost important track position early on. Following the incident, the car never felt right for the Columbian who couldn’t push his Honda-powered machine as much as he would’ve liked.

Despite falling as low as 20th at one point in the 22 car field, Chaves managed to make his way up to 13th by the time the checkered flag flew on Round 8 of the Verizon IndyCar Series season.

Next up for the Dale Coyne Racing team will be the Texas Motor Speedway Firestone 600 on June 11.

What they have to say:

Conor Daly – #18 Jonathan Byrd’s Hospitality
“Again, we charged from the back, it goes to show that we’ve got a great car and this Honda powered Jonathan Byrd’s/Cancer Treatment Center of America machine is good for racing, it’s just that I hate to be made to start so far back. Makes you think what could’ve been. All in all, a great weekend just for points, just to get back on the board after the disaster at Indy. It’s a nice bit of momentum going to Texas.”

Gabby Chaves – #19 Boy Scouts of America
“We got a good start but then someone hit us in the rear of the car so we lost a lot of positions on track fixing our rear wing. After that I don’t know if maybe we had some mechanical damage or what went wrong but I didn’t feel comfortable in the car all race and I was really struggling for pace. It was a hard race but we’ll see what we can learn and go forward.”