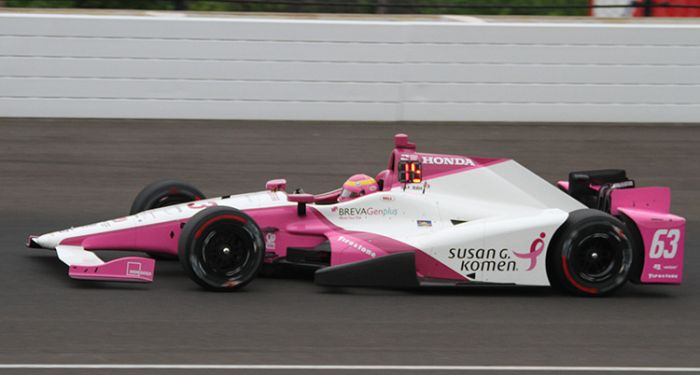 Indianapolis, IN (May 21, 2016) – After performing extremely well in practice earlier in the week, the Dale Coyne Racing team faced some challenges during the first day of qualifying for the Indy 500, with none of their drivers making it into the Fast Nine and a spin by driver Pippa Mann that was caused by a rear wing end fence failure.

Fortunately for Mann, she managed to only slightly tap the wall with her Susan G. Komen car and it only suffered minor suspension and bodywork damage. The crew are hard at work repairing the car and Mann will be back on track tomorrow to set her starting position.

Her teammates Conor Daly and Bryan Clauson set times, placing 17th and 22nd on the day’s time sheets, while Gabby Chaves withdrew his initial qualifying attempt and waived off his second.

All four drivers will be back on track tomorrow for the final day of qualifying and will be fighting for positions 10 to 33 for this year’s 100th Running of the Indianapolis 500.

The following are notes and quotes for each driver following today’s activities.

Conor Daly – #18 ShirtsForAmerica.com
– The American initially pulled out of line so the team could check the rear wing of his #18 car following Pippa Mann’s incident.
– Daly finally went out with just about an hour to go in qualifying and immediately withdrew his first attempt of 227.804 mph in order to try again for a spot in the Fast Nine.
– While Daly improved his average speed on his second attempt, his 227.862 mph average would only place him 17th on the time charts.
What he had to say:
“It was a tough day. A little crazy at first after being pulled out of the line for precautionary measures after Pippa’s rear wing end fence failure. I wish we would have practiced this morning because the track changed so much today. In the end, we’re not in the Fast Nine, which I really thought that we had the potential to do but it is what it is. That said, I think that we can be pleased that we’re pretty fast. I wanted to give it another shot, because the car wasn’t that great on my first attempt but it was such a short time between the runs, that the engine got too hot and we may have lost a little bit of power there.”

– Unhappy with his first qualifying attempt of 227.673 mph, after leading practice earlier in the week, Chaves withdrew his first time and ended up aborting his second run, knowing that he didn’t have the speed to make it into the top nine.
– Chaves will be amongst the first drivers to make a qualifying attempt on Sunday when the track goes green at 2:45pm ET.

What he had to say:

“On our first run we thought we had made an incorrect change, so we were still confident that for our second run we’d be able to nail it down and go back to the performance we had on Fast Friday. Unfortunately, that wasn’t the case, something is still a little off. We definitely have some time to check it out to try to be quick again. We’ll see what we can do tomorrow. I’m a little confused right now but I’m always optimistic, we always have to be. We’ve had a very strong car all week but it’s the first time something goes wrong so I’m confident the guys will figure it out and we can have our car back to how strong we’ve been.

Pippa Mann – #63 Dale Coyne Racing supporting Susan G. Komen
– A rear wing end fence failure caused Mann to spin going into Turn 2 on her first green flag lap. The car suffered minor damage and she was able to walk away.
– Mann will be the first car on track to qualify on Sunday.
What she had to say:
“That was a massively tough break with the failure of the rear wing end fence on my qualifying run. I’m just really glad that I was able to have quick hands and with some help from Lady Luck we were able to minimize the damage to the car. The boys are working away in the garage. We’ve had a great car all week. The engine wasn’t harmed, the gearbox wasn’t harmed, it’s mainly bolt on stuff so we’ll put it back together and we’ll go run strongly tomorrow.”

Bryan Clauson – #88 Cancer Treatment Centers of America
– Clauson was the first of the four Dale Coyne Racing cars to take to the track.
– Clauson was satisfied with his average speed of 227.110 mph and is looking to tomorrow to move himself up the grid.
What he had to say:
“Overall, it was a pretty good run for us. We’ve kind of been a step behind all week, for no other reason than trying to make up that experience gap. My team’s doing a really good job of walking me through the process, all our guys and gal, Gabby, Conor, Pippa, everybody’s been really helpful in bringing me along as quick as we can. I’m kind of mad at myself. I blew the first lap by making a couple of mistakes that probably brought the average down quite a bit. We were not looking at a Fast Nine run anyway, so we’ll regroup, come out tomorrow and try to move up the grid as much as we can. I’m really proud of all my guys, that’s as comfortable as I’ve ever been in qualifying here so I’m happy.”