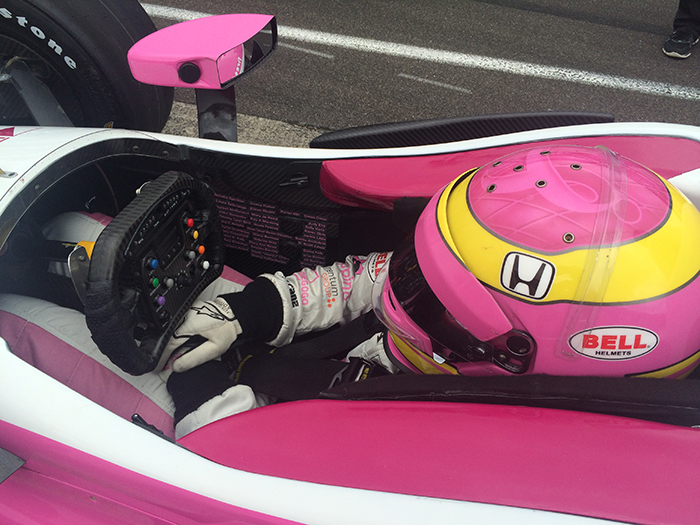 Plainfield, IL (May 2, 2016) – For a fourth consecutive year, Pippa Mann is returning to Dale Coyne Racing as part of the team’s effort at this year’s 100th Running of the Indianapolis 500.

Mann will once again be promoting her 2016 Pink #GetInvolved campaign, raising funds for Susan G. Komen, while sporting a pink helmet with the Komen Running Ribbon for the third straight year.

“This cause is something very personal to me, and to Dale Coyne Racing,” expressed the driver of the #63 Dale Coyne Racing machine. “While racing a pink car the past two years certainly attracts attention and awareness for Susan G. Komen, the most important part of our partnership is taking this amazing stage that is the Indianapolis 500, and using it to raise money that can actually go towards care and research.

“Over the past two years, we’ve raised over a $100,000 through activities surrounding the racing program that support Komen’s mission, including the 2015 campaign; and we’re hoping to double last year’s goal this year!”

The 2016 campaign, which launched today, May 2, is looking to raise $100,000. For those who wish to donate, there are a variety of support packs available. These include new artwork from Doug Garrison, the return of the “Turn the Cockpit Pink” option, a total run of 300 “Pippa” Bell mini helmets — 100 of which will be signed and available via the campaign — as well as her signed helmet and suit that she’ll be wearing during this year’s event.

Last year, the campaign raised $61,150 for the world’s largest nonprofit source of funding for the fight against breast cancer.

“Pippa has been a tireless advocate for our mission to end breast cancer and the funds she has raised are helping to fund research and serve women facing this disease. We are grateful to her and the Indy 500 family for their life-saving support,” said Dr. Judy Salerno, Komen president and CEO.

This year’s historic event will mark the fifth time that the Verizon IndyCar Series veteran competes at the famed Indianapolis Motor Speedway aboard an Indy car.

“I’m so happy to be confirmed for the 100th Running of the Indianapolis 500 with Dale Coyne Racing. I fell in love with the Indy 500 when I saw it live for the first time in 2009, and it’s always such a special event to be part of,” said Mann. “Dale Coyne Racing has been my home now for the past three seasons at this race, and I am so thankful for the support and opportunities I have had with Dale and Gail’s team.”

Mann, who competed with DCR in five other oval IndyCar events aside from the Indy 500 last year, will be paired up with engineer Rob Ridgely, with whom she achieved her best IndyCar finish of 13th last season.

“I’m also excited to be teaming up again with my engineer from last season, Ridge, for our first Indy 500 together. I think the continuity of having worked together last year will really help us conquer some of the learning curve that comes from being a one-off entry each year. Working together, we finished both of the other 500 mile races in the top 15 last year, so it would be nice to try and continue, or improve, upon that trend this May at the Indianapolis Motor Speedway.”

“We are very pleased to continue our relationship with Pippa and the Susan G. Komen organization”, commented Team Owner Dale Coyne. “Pippa has shown tremendous dedication and drive in a sport that has been our lives for years. With her positive efforts on the ovals last year, coming back for the 100th running of the Indianapolis 500 this year is only a natural.”

To donate to the #GetInvolved campaign, or for more information, visit https://igg.me/at/getinvolved2016

Additional partners for Mann’s 2016 Indianapolis 500 effort will be announced at a later date.

Genetic Technologies is a molecular diagnostics company that offers predictive testing and assessment tools to help physicians proactively manage women’s health. The Company’s lead product, BREVAGenplus®, is a clinically validated risk assessment test for non-hereditary breast cancer and is first in its class. BREVAGenplus improves upon the predictive power of the first generation BREVAGen test and is designed to facilitate better informed decisions about breast cancer screening and preventive treatment plans. BREVAGenplus expands the application of BREVAGen from Caucasian women to include African-Americans and Hispanics, and is directed towards women aged 35 years or above, who have not had breast cancer and have one or more risk factors for developing breast cancer. The Company has successfully launched the first generation BREVAGen test across the U.S. via its U.S. subsidiary Phenogen Sciences Inc. and the addition of BREVAGenplus, launched in October 2014, significantly expands the applicable market. The Company markets BREVAGenplus to healthcare professionals in comprehensive breast health care and imaging centres, as well as to obstetricians/gynecologists (OBGYNs) and breast cancer risk assessment specialists (such as breast surgeons). For more information, please visit http://www.brevagenplus.com and http://www.phenogensciences.com.

About Susan G. Komen®
Susan G. Komen is the world’s largest breast cancer organization, funding more breast cancer research than any other nonprofit while providing real-time help to those facing the disease. Since its founding in 1982, Komen has funded more than $889 million in research and provided $1.95 billion in funding to screening, education, treatment and psychosocial support programs serving millions of people in more than 30 countries worldwide. Komen was founded by Nancy G. Brinker, who promised her sister, Susan G. Komen, that she would end the disease that claimed Suzy’s life. Visit komen.org or call 1-877 GO KOMEN. Connect with us on social at ww5.komen.org/social.