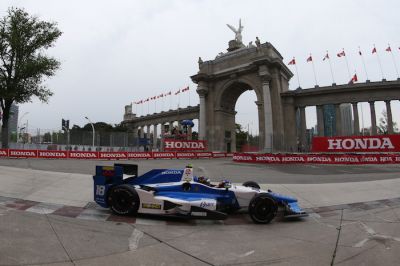 TORONTO – Dale Coyne Racing drivers Rodolfo Gonzalez and Tristan Vautier returned to action this weekend in the Honda Indy Toronto just two weeks removed from another street race in Detroit. The circuit was a familiar one for Vautier, having raced there in the past, but was a new experience for Gonzalez due to his limited racing in North America.

The 1.75 mile street circuit in downtown Toronto, Ontario allowed drivers to turn more practice laps than it did for last year’s doubleheader race. Since he had never driven in Toronto, having a practice session canceled was not to Gonzalez’s advantage going into qualifying. He started in 23rd position.

Rodolfo Gonzalez went for an alternate strategy early in the race, staying out during the first caution when most others pitted. This put him on the same strategy as Castroneves and it, ultimately, didn’t pay off for either of them.

For the Verizon IndyCar Series rookie, being able to run with the faster cars in the series was great experience. Gonzalez was able to keep Pagenaud behind him in 6th place for several laps during the middle of the race. Towards the end, he led the race for six laps, but knew he would have to pit one more time. Gonzalez held eventual race winner Josef Newgarden at bay before being forced to pit for fuel.

“I think we took a big risk on our strategy and, in the end, it didn’t pay off because we we got that second caution so quickly and it screwed us up a little bit,” said Gonzalez. “It was certainly fun. It is only my third race and to be spending any time leading is great.” After his last pit stop he would end up in 18th place.

Tristan Vautier started the race 21st after an engine issue in qualifying kept him from a strong, mid-pack qualifying effort. At the race’s start, Vautier was battling Coletti going into Turn 3 and, being on the outside, he had no choice but to follow off course when Coletti braked too late. From the back of the field, Vautier did his best to make up positions, but fuel saving in the final stint prevented anything better than his 17th place finish.

The Verizon IndyCar Series will take their first weekend off of competition since the beginning of May this next weekend before heading to the West coast for the MAVTV 500 in Fontana, California. For the past several years, this race has been the season finale, but it has been moved up in the schedule this year. A Saturday afternoon, Southern California race in June should provide lots of challenges to all competitors. The race will be shown live on NBCSN at 4:00 PM ET on June 27.