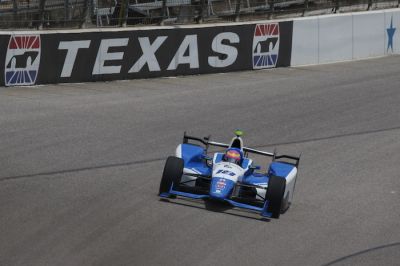 FORT WORTH, Texas – After driving two of the three Dale Coyne Racing entries at the Indianapolis 500 this year, Pippa Mann and Tristan Vautier were tapped to pilot the two Honda powered cars for the Firestone 600 at Texas Motor Speedway this weekend for DCR.

Coyne has had success at TMS having won the race with Justin Wilson in 2012. The 1.455 mile oval has 24 degree banking in the turns and provides unique superspeedway racing for the Verizon IndyCar Series. Vautier and Mann each made their second career start at TMS this weekend.

Pippa Mann and her engineers opted to utilize the limited practice time to get the car setup for race conditions and didn’t even do a qualifying simulation during practice. She qualified the No. 18 Honda in 22nd place.

Mann made use of this race setup to make a charge up the field early on. She moved up to 18th place in the first 35 laps of the race and ran as high as 13th in the race. The long run setup the engineers put on her car wasn’t enough to keep her running in that position and she eventually went a lap down to the leaders. Mann’s experience on big oval tracks allowed her to hang tough with the other lapped cars and she crossed the finish line in 17th place.

“Overall I think we had a pretty solid race,” said Mann. “We were hoping to have a slightly better car after how well we ran last night in practice. I had a lot of confidence coming in to tonight but we were just that little bit off and that hurt our result some.”

Tristan Vautier started the weekend strong by turning the 8th fastest in the first practice session but couldn’t translate that performance to qualifying. He started the race in 16th position.

While Mann’s initial pace was very good, Vautier was even stronger. He jumped 5 positions in the first three laps and held 11th position for several dozen laps. As his tires started to go off, he shuffled back a bit, but did run as high as 5th place as he was able to go 55 laps on his first stint.
Shortly after the halfway point of the race, Vautier was forced to retire with a mechanical issue to the right rear suspension. He finished in 20th place.

The Honda Indy Toronto race will play host to the 10th race of the season on June 14. The race, previously a double header, is moved up in the season schedule to accommodate the Pan Am games being hosted in Toronto in July. The 11-turn, 1.75 mile street race will air live on NBCSN at 3:00 PM ET.