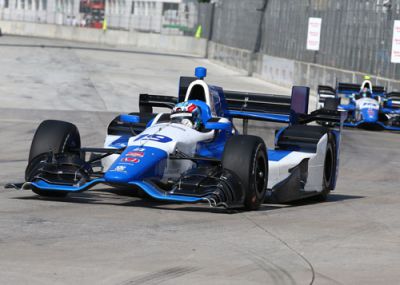 DETROIT – Drivers Rodolfo Gonzalez and Tristan Vautier each made their second start of the season for Dale Coyne Racing in the Chevrolet Indy Dual in Detroit presented by Quicken Loans. This weekend double header presented a packed three day schedule where drivers practiced and qualified for race 1 on Friday and battled it out on in afternoon races on Saturday and Sunday.

The 2.35 mile street circuit on Detroit’s Belle Isle has 14 turns and features several track improvements over previous years including new pavement and better drainage. The track’s ability to flow water from the racing surface was tested in both races as a heavy rain system moved through the area over the course of the weekend.

Despite not racing in Detroit since 2013, Tristan Vautier was quick on Friday and qualified the No. 19 Dale Coyne Racing Honda in 11th position. He felt there was possibly more in the car but the consequences of exceeding the cars limits on a double header weekend are immense. The rain shortened race on Saturday didn’t go to plan as was the case for many of the teams that took an early gamble on rain tires. Running the treaded Firestone tires too long on the dry resulted in extra stops and a 17th place finish.

Vautier would not have the opportunity to improve on his qualifying effort on Sunday morning as the session was canceled due to standing water on the track surface. He would start 23rd based on entrant points.

The highlight for Coyne this weekend was Vautier’s impressive drive from last on the grid. Through fuel strategy and patient, aggressive driving, he moved into the top 10 in the latter stages of race 2. Vautier chose his times to attack wisely and, late in the race, passed series veterans Juan Pablo Montoya and Tony Kanaan en route to a fourth place finish.

“It was a fine line between aggressive and keeping the car in one piece, but we found it today so it is amazing,” said Vautier. “A big thanks to Dale Coyne for having me drive for his team this weekend and thanks to all the guys.”

Rodolfo Gonzalez struggled a bit more with pace compared to his teammate due in part to his long layoff from street course racing. Gonzalez has a road and street racing pedigree having made many GP2 starts, but he had not raced on a street circuit since Monaco in 2012. He started both races 22nd and earned 21st and 22nd place finishes.

The Coyne team will spend the next few days setting up and transporting the cars for the second super speedway race of the season in Texas. The Firestone 600 is scheduled for Saturday night, June 6 and will be shown live on NBCSN at 8:00 PM EST.