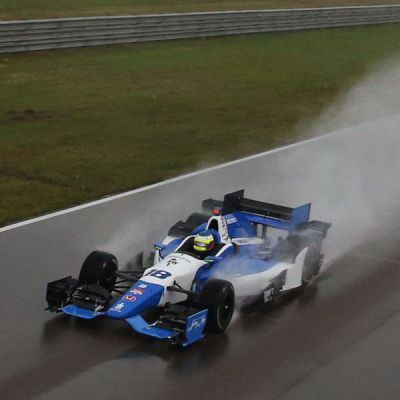 New Orleans, La. – A rain soaked weekend in New Orleans resulted in a very ominous water stream during the race that affected the fortunes of the Coyne crews. The No. 18 car of Carlos Huertas was poised for a possible strategy aided win on Sunday as the Verizon IndyCar Series and Dale Coyne Racing made their competitive debut at NOLA Motorsport Park.

The Dale Coyne Racing team, again, showed their expertise in timed race strategy. Carlos Huertas was running second in a race that would only see 3 more green laps. This gave him an excellent chance to win the race.

“We had an extra 5 laps on eventual winner James Hinchcliffe,” commented Coyne. “However, starting from second behind Hinch, Carlos spun on the turn 13 stream of water and took himself back in the grid and gave James the extra caution and shorter race distance that he needed to get to the end on fuel. We had enough fuel.”

Of that turn Huertas said, “That area of the track was really bad. I don’t think I did anything crazy but I think the angle of the car when I put a little bit of power was too much to the right and I lost the car.”

Huertas continued, “I think that mistake probably cost us a podium looking at how the race played out. I don’t know if I could have won the race but I was there with a chance to win it today. My mistake is the only reason we finished where we did.” Huertas went on to earn a 16th place finish.

Coyne felt the strategy the team chose was perfect. Huertas had last pitted on lap 18 while Hinchcliffe pitted on lap 13. It would have been close to have enough fuel to make it to the checkered flag, but sometimes teams have to take these gambles in timed races. Unfortunately, it was very wet in that corner and Huertas’ spin and contact with the inside barrier ended his podium chances.

That same stream of water would cause a much more serious situation on the No. 19 car. The water was pouring across the track in that location and under the outside wall. From there, it was streaming right in between the two Coyne pits. On lap 23, the pit immediately after the water, that of Francesco Dracone in the No. 19 LaPasta car, would have a serious pit incident with one of its crew members.